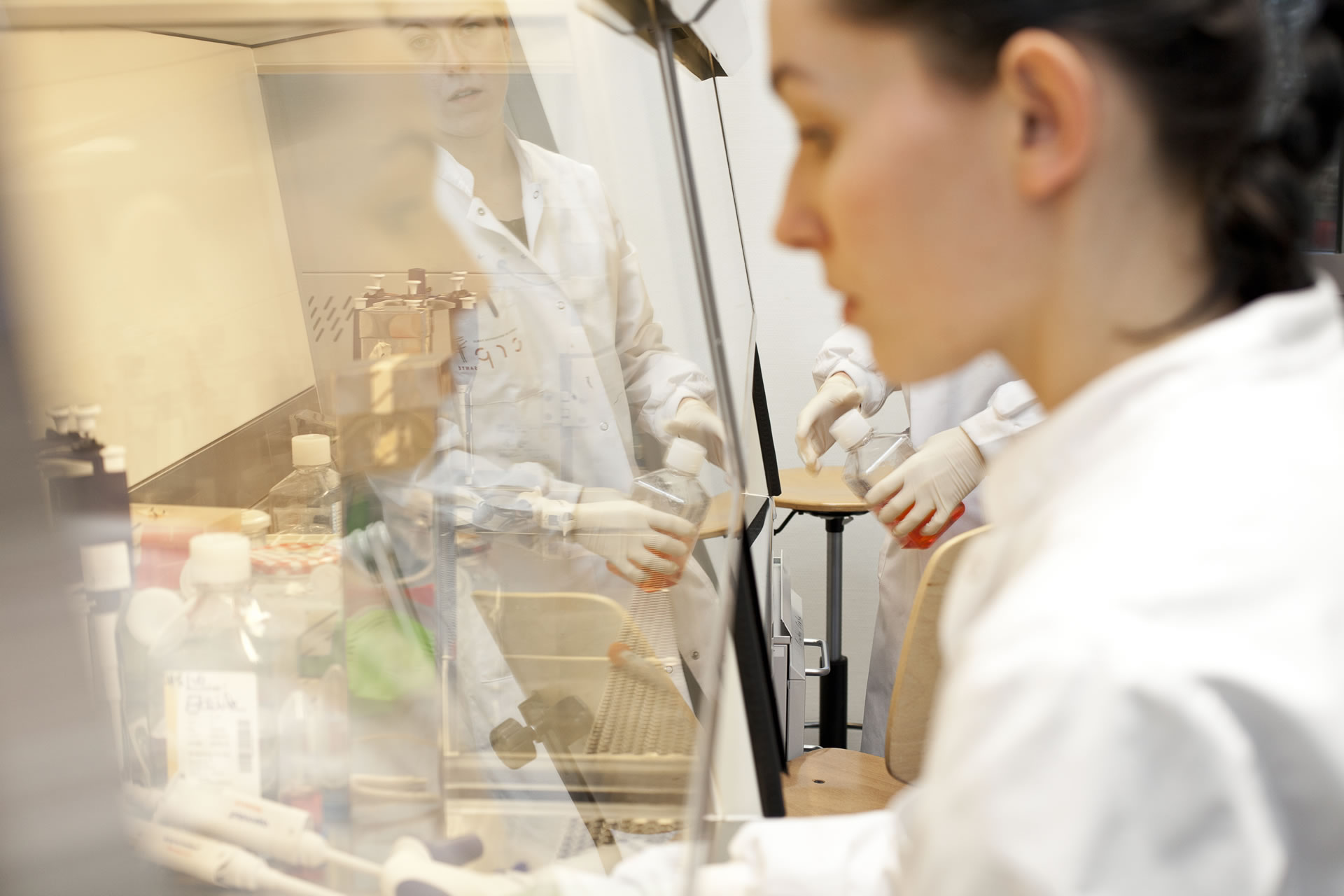 Brain tumors describe the abnormal growth of tissue in the brain or the central spine that leads to a disruption of proper brain functions. Brain tumors can arise directly from cells within the brain (primary brain tumors) or derive from metastatic cells of peripheral tumors (metastatic or secondary brain tumors). The treatment of brain tumors is difficult due to the delicate localisation within the central organ of the human nervous system. Accordingly, current research is strongly focused on improving treatment strategies to enhance affected patient survival.

Glioblastoma (GBM) is the most malignant primary brain tumor. Despite standard therapy, median patient survival is around 14 months, with relapses being frequent. This is due to tumour evolution, the clonal heterogeneity and the highly infiltrative character of a subset of tumour cells. It is a general notion that such subsets of pro-invasive tumour cells have distinct genetic signatures compared to cells of the tumour core.

Tumorigenesis of brain tumours is not only driven by cell intrinsic mechanism but also strongly influenced by the tumour microenvironment. Amongst others, microglial brain immune cells are the most common cellular entities that interact with the GBM tumours representing up to 30–50% of the tumour mass. Tumour cells have been shown to interact with immune cells of the brain creating an immunosuppressive microenvironment. Our “Contribution of microglial reprogramming to glioblastoma progression: exploring DNA methylation” project addresses the question of epigenetic changes in microglia following interaction with GBM tumour cells. We assume that these epigenetic changes might cause the tumorigenesis promoting phenotype of brain microglia. We expect that further knowledge of the microglia-GBM crosstalk will be the basis for potential therapeutic strategies for improved treatment of brain tumours in general, and furthermore, pave the way to prevent the initiation of glioblastoma development in patients at risk to develop those tumours.

Metastatic brain tumours are associated with significant morbidity and mortality. Melanoma is one of the most frequent causes of secondary brain tumours. One critical stage leading to brain metastasis is the migration of cancer cells through the Blood-Brain-Barrier (BBB). Within the “Mechanism of brain metastasis in melanoma“ project, the LCNP research unit aims to decipher which processes metastasising cells undergo when passing the BBB. Here, the unit intends to identify components that can be targeted in order to prevent the formation of brain metastases.

One of the major obstacles brain tumour treatment faces is the total surgical resection of all tumorigenic cells. The infiltrative capacity of several brain tumours prevents complete eradication of cancer cells and in contrast to many tumour entities in the periphery excessive brain tissue removal is impossible. The capability of precise differentiation between healthy versus tumour-cell-invaded brain tissue during surgery is therefore essential for the therapeutic success of brain tumour patients. “The use of Raman spectrometry in brain cancer diagnosis” project is a promising approach to improve intra-operative diagnostics. By collecting Raman spectra of brain tumour cohorts and further relate obtained data to neuropathological parameters, this project aims to implement a classification of several brain tumour entities to optimise intra-operative optical diagnostic.

View all projects on our research portal

Some of the group’s research projects include:

Want to join us ?

The LIH Research Portal allows you to search and find information about all active researchers, units, outputs, projects and infrastructures.

Stay up to date


We use cookies on our website to give you the most relevant experience by remembering your preferences and repeat visits. By clicking “Accept All”, you consent to the use of ALL the cookies. However, you may visit "Cookie Settings" to provide a controlled consent. For more information about how LIH processes your personal data please click here.
Read More Cookie Settings Accept All

This website uses cookies to improve your experience while you navigate through the website. Out of these, the cookies that are categorized as necessary are stored on your browser as they are essential for the working of basic functionalities of the website. We also use third-party cookies that help us analyze and understand how you use this website. These cookies will be stored in your browser only with your consent. You also have the option to opt-out of these cookies. But opting out of some of these cookies may affect your browsing experience.
Necessary Always Enabled
Necessary cookies are absolutely essential for the website to function properly. These cookies ensure basic functionalities and security features of the website, anonymously.
Functional
Functional cookies help perform certain functions, such as sharing the content of the website on social media platforms, collecting feedback and other third-party functions.
Performance
Performance cookies are used to understand and analyze the key performance indexes of the website which helps in delivering a better user experience for the visitors.
Analytics
Analytical cookies are used to understand how visitors interact with the website. These cookies provide information on metrics such as number of visitors, bounce rate, traffic source, etc.
Advertisement
Advertisement cookies are used to provide visitors with relevant ads and marketing campaigns. These cookies track visitors across websites and collect information to provide customized ads.
Others
Other uncategorized cookies are those that are being analyzed and have not been classified into a category as yet.
Save & Accept